Winter is my favorite time of year to curl up fireside and read. I can still remember one holiday in the 1990’s when I’d first discovered The Wheel of Time and spent my entire break in front of the fire churning through Robert Jordan’s voluminous books (I think there were seven released at that point).

I’m often asked by my readers if I could recommend some other fantasy series they might enjoy, so in the spirit of holiday sharing, here is my list of recommended reads. I’m not including George RR Martin, Robert Jordan, Pat Rothfuss or Sanderson because they’re already on plenty of lists and don’t need my recommendation.If you’ve been reading fantasy for a while, you’ve probably already worked your way through this list and have more you can add to the comments. Please do! This is not meant to be a comprehensive list, and I know I’m missing many great authors. That said, if you’re relatively new to the genre, this will make a nice holiday reading list.

I’ve included some of my favorite series here—the ones that have stuck with me over the years, the ones that pulled me in right away. Some of these books have inspired my characters or my work, and all of them hold treasured shelf space in my permanent collection.

If I loved the first book but not the entire series (N.K. Jemison’s The Hundred Thousand Kingdoms comes to mind) I didn’t include it below. I’m only listing here those series that kept me captivated through the very last word. Hopefully you’ll find a new series below and will enjoy this upcoming holiday as I did all those years ago, exploring a delightful new world.

Why I love it: If you haven’t picked up this series because you’ve read negative reviews and worried the main character would be too reprehensible, unlikable or otherwise turn you off, don’t hesitate any more. This is one of the most unique and compelling series I’ve come across in my thirty years of reading in the genre.

Rarely have I read a series where the writer’s voice seemed so perfectly suited to a character. Lawrence’s style is the perfect vehicle for Jorg, and he writes with a magnificent turn of phrase.

Yes, the writer explores some very dark moral corners, but they’re worth exploring. This is a story of a broken empire and a broken child, and it shines a light on the consequences of circumstance in a compelling way.

Why I love it: Often it’s the characters that stay with you far longer than their story. This is the case with Friedman’s Gerald Tarrant, a charismatic villain written in an age before the antihero became mainstream and still a standout, even among today’s plethora of malevolent heroes. The story is interesting in its own right, but it’s Tarrant’s unique form of vampirism and the demons that haunt him that keep you turning the pages, both hoping and not hoping for his redemption.

There’s a glorious darkness to this series, and especially to Tarrant, that make him one of the most compelling characters I’ve encountered. Gerald Tarrant convinced me that dark heroes can be awesome and was one of the inspirations for Pelas and his Malorin’athgul brothers.

Why I love it: Carey writes so beautifully and with such lyrical phrasing that if you’re not drawn in from the first page, I’ll be very surprised. I rank her with Pat Rothfuss in terms of the quality of the written word. Carey’s Phèdre nó Delaunay is one of the most enduring heroines I’ve come across in fantasy—striking, brilliant, brave. Utterly unforgettable.

The story includes an epic number of characters, though it’s told in first-person (I often argued against early complaints of the number of characters in my books by referring them to Carey’s Dramatis Personae), and exceptional world-building. This series has a deliciously dark and sensual undercurrent. If you’re squeamish about sex scenes, though, it’s not for you.

Why I love it: ‘Amber is the one true realm, casting infinite reflections of itself.’ There are so many things to love about this Hugo and Nebula award-winning series. Zelazny wrote in a time when you had to search far and wide to find a series not deluged by Tolkienian stereotypes.

The treachery and backstabbing in this book gives even Game of Thrones a run for its money. Yet it’s as far removed from Martin’s world as Prince Corwin is from Amber when he wakes on Earth recalling little of his past. Zelazny’s use of patterns was an inspiration for my own series. I just wish I could’ve come up with a means of communicating that’s as ingenious as the Tarot the princes of Amber use to reach each other across the reflected worlds. 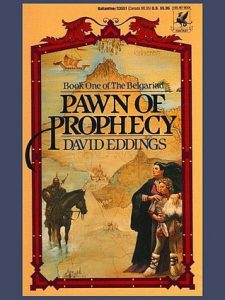 The Belgariad and The Mallorean – David Eddings

Why I love it: I have many times used The Belgariad and The Mallorean (the latter is the continuation of the former) to introduce new people to the fantasy genre. Prophecy, magical talismans, quests to save the world, vindictive gods, treacherous priesthoods, barbarians, sorcerers, knights and spies…

Eddings wrote these books in an attempt to use every possible fantasy trope in a well-written way. This is a delightfully fun, witty and clever series comprising ten books that even the most jaded fantasy reader will enjoy.

Why I love it: After starting and discarding several highly lauded fantasy series that felt like cardboard in my brain, I was thrilled to be drawn into Staveley’s story from the very first word.

As you might expect, after creating a number of compelling characters myself, I’ve become rather discerning about who I spend my time with. I was relieved and excited to find bold adventuring companions in Staveley’s heroes and heroine. I suspect you’ll sink into his world just as quickly, and as happily, as I did.

Why I love it: Brust has a plethora of books in this series now, and I confess I haven’t read the latest few, but the dozen or so that I have gotten through have all been wickedly fun.

Vlad Taltos is one of those insouciant, irrepressible thief-assassin-hero types with a penchant for trouble that almost but not quite outweighs his talents. He’s the fantasy equivalent of Clive Cussler’s Dirk Pitt with a wise-cracking (but only to his psychic hearing) flying lizard for his sidekick.

These are just a joy to read.

Why I love it: In a similar vein to Brust, Lynch’s Gentlemen Bastards have a certain irrepressible penchant for trouble that makes for a great story. Lynch does a masterful job of balancing the light and the dark in his series, so that you can’t ever become too comfortable with the safety of Locke and his band of miscreants. Considering how outrageously daring they are, this is an effective way of keeping you turning the pages. His world feels delightfully different and new, yet it’s familiar in all the right ways. And by far he has the best fantasy kingdom and city names I’ve ever encountered.

Why I love it: Published during the 90’s sword and sorcery heyday, Douglass’s series might feel a little trite now to the seasoned fantasy reader, but the depth of her characters and the strength of their relationships as they struggle with a crumbling world grounds this story in reality. Douglass’s work reminds me of Robin Hobb’s Farseer trilogy but without so many characters who leave you brokenhearted.

If you want to branch out from traditional epic fantasy into urban fantasy, I’ve really enjoyed the Shadowside Novels by Michelle Belanger, the Charley Davidson books by Darynda Jones, the Iron Druid Chronicles by Kevin Hearne, and The Fever Series by Karen Marie Moning (in fact, Moning’s Jericho Barrons sits next to Phaedor in my esteem.) And of course, the great Anne Rice (if you read her book The Mummy or Ramses the Damned, you’ll find shades of a very important character in my series).

You can see my full Goodreads list of recommended series here. If I’ve missed your favorite fantasy series here, please recommend them in the comments. I would love to know about any series that you enjoyed which I might’ve missed.