Some Thoughts On Maps

In my last blog post, I included updated images from Kentaro Kanamoto for the cover of The Dagger of Adendigaeth and expounded on my beliefs about the importance of your book cover. I’m now revealing the new Map of Alorin (which I am totally in love with) and saying much the same thing about fantasy maps. 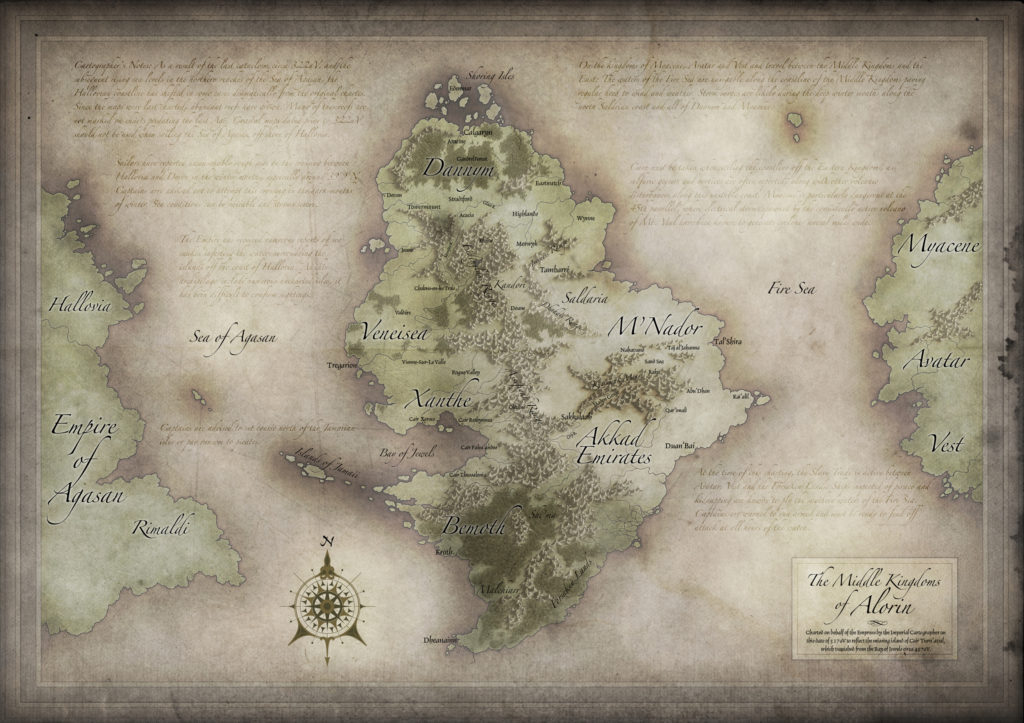 As much as a cover, a map helps establish the world’s “feel” and gives readers a dimensional orientation. Also like the cover, the map becomes inseparable from the story when a reader thinks back on their experiences while on their journey through your world. Anyone who’s read Jordan’s The Wheel of Time Series will remember the map scripted gloriously on the inside cover, and I certainly can’t think of Mordor without picturing the line of forbidding mountains penned on Tolkein’s map, and which Peter Jackson so dutifully captured in his movies.

I’ve spoken in other blog posts about my thoughts on character and story development and the value of letting much of that happen organically as opposed to studiously plotting three-part structure and the number of teeth your character has. But if there is something in writing a fantasy story that you should belabor over, it’s your map. I recall an entire day spent at one end of my kitchen table creating an early version of this map (with most of that time engaged upon drawing mountains). The more I fleshed out the world, the more ideas I had about its unique characteristics, the more places I wanted my characters to go. The map has seen nearly as many iterations as Cephrael’s Hand. As the story of book 1 changed, it changed, but the essential orientation has rooted the story from the beginning and allowed me (and my characters) to freely explore.

This map of Alorin’s Middle Kingdoms, where the bulk of the story takes place, was created by Ramah Palmer and Brandon Lidgard, with some finishing touches by yours truly. I wanted it to convey a sense of ages past while also imparting an elegance that is equally reflected in the story.

Let me know how we did!

(You can find a larger version of this map on The World page of this site).