On Reviews, Obsession and Art (and a gratuitous adorable kitty pic) 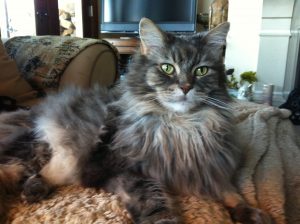 My cat Sam sits with me when I write, whether I’m working on my laptop or composing on the piano. He likes being around when I’m being creative, which is pretty cool, considering he’s a cat. As a child, the idea of having a cat for a writing companion seemed wonderfully romantic; in reality, he’s mostly in the way. He’s really fat, and he wants to be either lying in my lap, where my laptop is, or lying on my laptop itself—either of which situation conflicts with one’s ability to type.

Even so, I obsess over my cats. I’d like to think I don’t, but I do. It’s just in my nature. I don’t think you can be a good fantasy writer and not have obsessive tendencies—at least not an epic fantasy writer.

To you, Joe and Marybeth Reader, this is probably just some book you picked up for somewhere between $0.99 and $10 dollars (most likely). Maybe you loved the story and happily gush about it to your friends. Maybe it wasn’t your cup of tea. Maybe you hated it with a passion. I can safely say, Joe and Marybeth, whether your response was lukewarm or glowing, the writer of that novel obsessed over every part of it far longer than you did over their choppy dialogue or the errant typo encountered during your thirty-minutes-before-bedtime daily vigil.

Art of any kind is basically communication. Good stories are all about communication. Simple tales might have one thing they hope to communicate. If the story is well crafted, that communication is universally received. The more complex the story, the more obscure the ideas being conveyed, the more varied the reception of the author’s communication. And when you’re writing about invented worlds and races, when you’re crafting a commentary on real life but using a parallel world to do it, when you’re weaving a tapestry of philosophical ideals meant to be explored and evaluated, compared and pitted against reality, and when you’re writing at a level that requires a fairly high degree of literacy in your reader…well, that single communication has turned into a peacock’s fan colored by nuance and intimation, where each feather represents a different character and each swirl upon the fan poses another thread of philosophical exploration.

The greatest reward for an author isn’t in the money someone pays for their work. It comes when that reader receives the author’s communication. I don’t care if someone disagrees with me, so long as I can tell from their comments that they at least understood what I was saying.

To be understood—that’s all any of us really seek from others, isn’t it? In the broad scheme of life, don’t we all just want other people to understand why we do what we do, why we react a certain way, why we feel certain compulsions or harbor unusual passions? Don’t we want them to understand those parts of ourselves that we don’t even comprehend?

There are a lot of varying viewpoints about reviews. Truthfully, I welcome any review, because a) I want to know if my communication was received and b) they help encourage potential readers to pick up the book.

But with this said, let me ask, what would be your ideal review? Would it embrace the whole of your story in a way that lets others know what they will find within its pages? Would it touch upon your philosophies and story threads, and capture the essence of favorite characters? Would it encapsulate your communication as the author, even if reduced to a few succinct sentences? And would it give, overall, a sense of the world, the characters, the feeling of being there and what it’s like to have experienced the story?

When a reviewer writes a review so expertly detailed, so eloquent, so revealing of their depth of understanding that you’d think they were talking about their own novel…this is the highest compliment any author could receive.

I recently read such a review. I’ve been sending it everywhere, because no better summary has ever been written of my novel. And it starts like this:

“Melissa McPhail created a world unlike any other in fiction but also not unlike our own, where individualism and unity exist all at once; good and evil coincide, are intertwined, and vary in shades; and philosophy, mundane and profound, shape lives. With her debut novel, she captured a world—from its physical base to its ethereal heavens, and everything tangible and intangible between, before known time and (hopefully) not its “after.”

Please read the rest at The LUV’NV, because it truly is an amazing review. Itself a work of art.

And thank you again, Raindrop Soup, for understanding me so beautifully.