Keeping it short because it’s nearly Christmas (for those who celebrate it), and regardless, I know most of you have better things to do than spend hours reading my blog. So, as promised, here’s where things stand:

I was hoping to have a book five cover and title ready to release, but my artist needs another week or two, so you can look for (miracle of miracles) another blog post from me within the next few weeks, revealing all of that.

I’m also working on a compilation of the chapter quotes from the first four books. Everyone currently subscribed to my newsletter will receive a complimentary ebook copy once that book is ready for print. Again, I was hoping to have this release ready for you by Christmas, but my cover artist apparently has other clients (imagine!) and I got it to her too late to get it fully finalized before the holiday. So sorry, everyone!

However, you can take a look at the two cover designs she’s working on right now. Let me know if you prefer one over the other. I would love to know your thoughts. 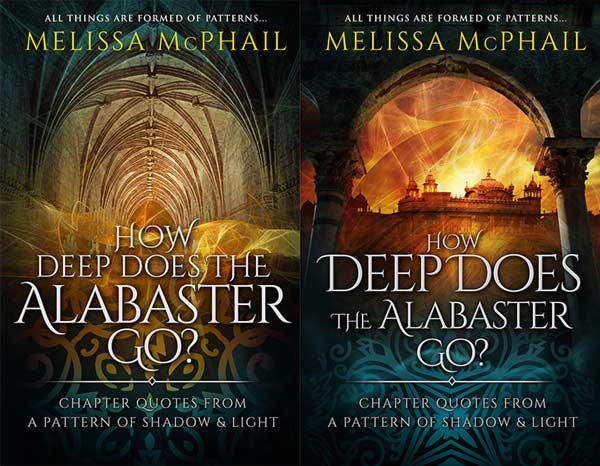 In terms of book five, we are down to the very last story thread. This is real, people. I’m actually almost done writing the book. If you’ve been reading my blog for a while, you’ll know that means that the book is practically ready to go to print.

I can’t work this way. The Muse turns her back on me in utter disgust, and everything freezes up like a deer in the headlights. So I don’t do “rewrites.” I have to write every chapter to—I hesitate to say perfection; let’s say, “capable of achieving an emotional impact.” With that caveat, I don’t leave a chapter until it’s basically as perfect as possible at that point in the story.

Once all of the chapters are finished, I have sequencing to do.

I write in character threads, taking each character’s story line as far as possible until I have to jump over to someone else’s storyline and get more written there, because the second character intersects with the first character, and I usually don’t have things thought out beyond that first intersection. It’s a lot of jumping around, especially with this book, and I have to have notes at the tops of the chapters like, “This has to come before Ean 7 but after Shail 4 and before Tanis 6.”

Anyway, sequencing usually takes most of a day. Then I do a final edit, which involves my own sweep through the story one last time to make sure all of the sequencing makes sense, the story flows well, and nothing jars you, dear reader, as you go from character to character with each new chapter. This usually takes a week or so.

After my final edit, the book goes to my core group of beta readers. They read the story at lightning speed, forswearing everything but coffee or tea and possibly a meal once a day, if someone brings it to them. I get their feedback and incorporate any changes I deem necessary.

Next, the book goes to my editors. They do a thorough review to ensure the book is free of homonym mishaps and dangerous gaps of continuity and logic resulting from my own nebulous daily subsistence on tea, yogurt and apples.

Finally, my copy editor does her final sweep, seeking the dreaded typo, and upon her completion, the manuscript gets sent over for formatting. Basically, it’s all downhill from there, folks.

My glorious, back-breaking, stab-me-in-the-heart Prince Sebastian, who’s been as reticent to let me write his story as he is to assume his status as heir to the Eagle Throne.

Tied into Sebastian’s thread is King Gydryn, the Duke of Morwyk, Queen Errodan in Calgaryn (yes we will FINALLY get back to her), and a couple of other characters who are the actual viewpoint characters of this story arc (along with Sebastian), but whose names I won’t mention because, spoilers!

So…we’re looking at about eight chapters still to write, based on my intuitive sense of things. Sometimes I jump into a character’s head and things really take off. Sometimes I get into the final edit and realize another chapter is needed to fill in a gap. So I’m not committing to the actual number of chapters, but I’m guessing it’s somewhere in this range.

Your million dollar question, of course, is when can I read it???

We’re setting a tentative release date of June 15, 2019. (We means the characters and me, in case that was confusing).

THE DAY is going to be here a lot sooner than you think, people. For me, knowing everything I have to do before I release this book, June 15th feels like freaking tomorrow.

But it’s out there now, and I intend to make it happen. Hopefully at least knowing when you’ll be able to get the book in hand will help mollify the craving. If not, I encourage you to engage in a little holiday frivolity to lessen the blow.

And with that, I bid you happy holidays!

Thank you for taking time out of your schedule with friends and family to read my update. I hope you all have a fantastic new year.

(And don’t forget to give me your feedback on the quotes book covers!) 🙂